I did it, at last :) And despite the misgivings of some, it came out beautifully. What do you think? :


I'm extremely happy with it :) ... I intend on getting it worked on further, when I'm able to afford it. "The possibilities are infinite" :P ... Well, as infinite as the skill of the tattoo artist allows. I worked on an idea and showed it to the guy who did mine before he started, and he seemed quite apprehensive, frowning, and saying that it would be impossible to get 'that effect'.

Here's what I'm talking about: 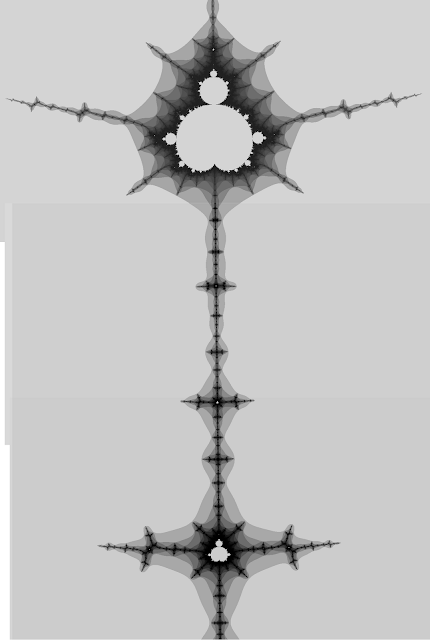 I mean, yes, I understand it would be a difficult process, but surely it's not impossible?

Anyway, I'm reconsidering this even now, though, hehe. As cool as having a fractal spine could be, I'm now thinking of keeping things simpler... I'll work on a few designs and post them later.

So why did I get a tattoo of the Mandelbrot? ... Well, the way I see it, it represents the essential, underlying nature of the universe. That's why. ... Chaos. Infinity. The hidden language (and beauty) of mathematics that exists not only in our Euclidean man-made world of technology and architecture, but also (as fractal geometry is proving to us) everywhere in the natural world of trees, rivers, organic bodies and galaxies.

Lastly, my apologies for not posting anything at all for 6 weeks! ... Life, you know... I'll get to Mandelbulb 3D again soon. There has been quite a nice update recently, I noticed :) .. Cheers Jesse.
Posted by Unknown 5 comments: Links to this post
Categories: fractal nature, Mandelbrot, tattoo
Newer Posts Older Posts Home
Subscribe to: Posts (Atom)