The True Cave of Lost Secrets, and A Dream of Death

I asked some of the guys at Fractal forums what they thought of why my Cave of Secrets image from the previous post looked so different from the original one on Daniel White's site, and Jesse, the creator of Mandelbulb 3D himself, gave me the answer: I was using the default Mandelbulb that loads when you open the program, but the original Cave of Secrets was rendered with a slightly different variation of the formula, known to me simply as the "CosinePow8" (found under the first "3D" tab in the formulas window.)

So I rendered it up, found the Cave, and tried to make it look exactly like the original. I'm zoomed a bit closer, the colouring is really not right, and somehow the original has more detail, but here is my result:


The detail is really nothing like the original and I'm wondering -why- ? ... If someone knows of a setting to increase detail, please let me know. I've tried several things to no avail. But won't give up!

Next, my second attempt at 3D fractal art, "A Dream of Death" : 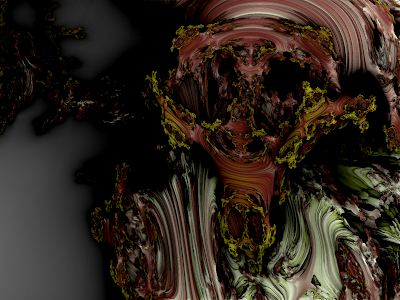 What do you all think? :) I'm very proud. Comments below will be greatly appreciated. I'll get to a "Mandelbulb 3D for beginners" Tutorial soon :) ... But right now, I'm really having fun just playing around.
Posted by Unknown
Categories: 3D Fractals, Fractal Art, Mandelbulb 3D